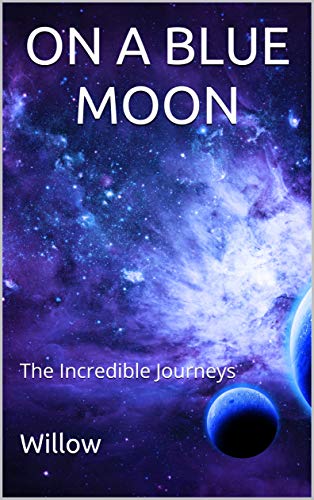 The lives of a man from Earth, an alien being, and a young girl converge on a moon deep in space. A violent act is the spark that ignites incredible journeys. The moon has three human societies. In each society there is an evil presence that the man, girl, their friends, and their loved ones must confront, or flee from. In the end, life on that moon is vastly transformed.

Willow is the author of ON A BLUE MOON. That tale, and the five to follow, are based on her experiences, and the accounts related to her by the many beings she has known, both human and nonhuman. Those tales are collectively THE DAUGHTERS OF FIRTH TALES.

At the beginning of each tale, after the Prologue and before the first chapter, Willow and her daughter, Frither, are together and interacting. Their banter is the thread that ties the six tales together by providing an introduction to each tale, and a hint about what’s to come. Sam is the main protagonist at the beginning of ON A BLUE MOON. As it and future tales progress, Willow, Frither, and the other daughters of Firth, become the driving force.

Earth, as viewed from space, is primarily blue. So is Bluemoon. Bluemoon represents a much less complex version of Earth, yet possess some of the malignant forces of our “real world”: a malicious leader of an autocratic society, a ruthless despot who has his henchmen kill anyone who dares oppose him, racism, and environmental destruction.

Shadow, an alien Meddler, represents an uncontrollable force that drastically alters Sam’s life’s journey, and that of the inhabitants of Bluemoon. Similar to how forces beyond our control shape our lives on Earth.

Overriding everything else, the tales are about the courage of individuals intervening to protect the vulnerable, while so many others observe but do nothing.

On A Blue Moon: The Incredible Journeys is an entertaining and complex science fiction novel that appeals to lovers of the young adult genre.

On A Blue Moon: The Incredible Journeys is a young adult science-fiction/fantasy novel written by a character named Willow.  The novel follows the stories of a man from Earth, an alien, and a girl as they fight off evil on a moon in deep space.  Each character transforms throughout the novel, and the reader can’t help but grow along with them.  I felt myself attaching to each character as their stories progressed, I was fully absorbed soon into starting the novel.

Willow, the author of On A Blue Moon: The Incredible Journeys, is actually a pen name.  She is a fictional character, and along with being the author of the book, she is one of the main characters.  The prologue of the book introduces you to Willow and gives some insight into her story and who she is in relation to the novel.  I found the prologue to be helpful because it gave me a sense of what the story was going to be about, and who Willow was.  The author’s unique storytelling abilities were inspiring and I adored how they were able to intertwine Willow as an author with her character in the story.  Even though there were multiple storylines throughout the book, it was easy to follow along and I didn’t find myself confused – which can often happen with science fiction novels.  However, the writing did seem to be directed more at young adults, and I didn’t find as much enjoyment in the story as I might have when I was a teenager.  With that being said, I think that young adults will eat up this novel and the incredible stories it holds!

On A Blue Moon: The Incredible Journeys is one of the most unique novels that I have read this year.  It is a beautiful science fiction/fantasy novel that appeals to young adults, and I wish that I had read it when I was younger.  If you are pining for a new science fiction novel to captivate you, then this one is it!