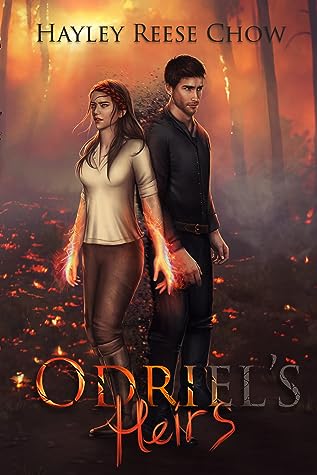 The brave, burning with fire, harnessed the Dragon’s Rage….

As the Dragon Heir, seventeen-year-old Kaia inherited the power of flame to protect her homeland from a Tell necromancer’s undead army. But after centuries of peace, the necromancer has faded to myth, and the Dragon Heir is feared by the people. Persecuted and cast out, Kaia struggles to embrace and control her seemingly useless gift while confined to her family’s farm.

But when the necromancer’s undead terrorizes the land once again, Kaia runs away to join the battle.

With the help of her childhood rival, the handsome Shadow Heir, and a snarky, cursed cat, Kaia must figure out how to control both her fire and her confidence in time to save Okarria. If she fails, she will sacrifice her family, her new friends, and the enchanting world she has only just begun to see.

And time is running out.

Odriel’s Heirs by Hayley Reese Chow is a captivating fantasy adventure filled with a storm of female power and breath-taking world-building.

Odriel’s Heirs is one of those rare novels that you read once maybe every ten years or so and can’t get it out of your head.  Hayley Reese Chow’s writing provided me with an emotional catharsis for experiencing and releasing passion, rage, and excitement, and I am changed after reading her astonishing novel.

Our story begins with Kaia – the Dragon Heir and our protagonist – who has inherited the power of the flame to protect her people from the necromancer’s undead army.  Unfortunately, the necromancer is now a thing of legend, and Kaia is outcast because others fear her power.  Kaia is forced to manage her gifts on her own while living remotely until the undead begins to terrorize her people once again, and her powers are needed so she joins the battle.

There is some ambiguity when it comes to interpreting Kaia’s circumstance, but I found it interesting how she was feared because of her power and outcast; however, as soon as her powers were needed, she was “useful” for once.  Kaia’s situation echoes some of the dilemmas facing modern women (such as others being intimidated by a woman’s talents and successes) and I found the ideology of feminism to be present throughout the novel.  I am a sucker for kick-ass female protagonists, and Kaia is the epitome of a world-rocking female.  Rather than taking on fighting the undead herself, Kaia teams up with the Shadow Heir – her rival – to embrace her power and bring justice back to their land and protect the people she loves.  Kaia is powerful while keeping her sights on protecting others and using her powers for the good of all.  She is a wildly complex character, and I simply fell in love with her.

But there is a reason behind why Kaia’s story is so powerful, and that is Chow’s writing style.  Her writing blew me away.  I found her world-building technique to be flawless and without wordiness that can often be present in high fantasy novels.  I floated away on her charming words and I was fully absorbed by the third page of the novel – a record for me.  Odriel’s Heirs filled all of my fantasy dreams, and I look forward to reading more of Chow’s work.

If you are a fan of high fantasy and strong female protagonists, then you are going to adore Odriel’s Heirs! It is a book that will stick with me for a very long time, and I am so grateful to the author for allowing me the chance to enter her awe-inspiring, richly imagined world.  I didn’t want to give away too much of the story, so go pick up a copy and find out for yourself what happens!  You will be glad you did.