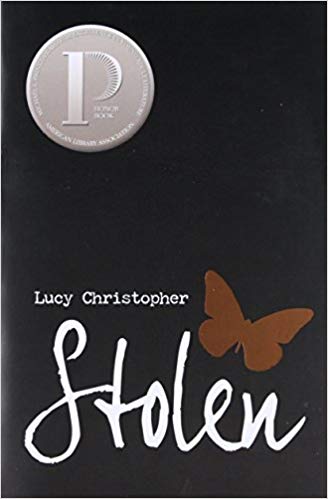 Stolen is a mesmerizing masterpiece that completely envelops the reader.  Rarely have I read a book that affected me as much as Stolen has.  It still haunts my dreams.

Stolen is a young adult novel written in the second person perspective as an intended letter to the protagonist’s captor.  Thriller novels that involve kidnapping are my favorite guilty pleasure reads, and I snapped up Stolen as soon as I heard of its unique structure and storyline.  My only regret is that I didn’t hear about this beautiful novel sooner.  I honestly am not sure how I had not heard of this novel until 2018 since it was published in 2009, but that’s beside the point.  Moving onward…

Usually, when I read thrillers that involve kidnapping, the kidnapper is described as a monster, and the kidnapee spends most of the novel despising their kidnapper and trying to escape.  However, Stolen is different due to the fact that the kidnapee – Gemma – begins the novel despising her kidnapper, but ends up having a connection to him that can almost be described as love.  Since Stolen is written in letter form, Gemma’s mixed emotions surface throughout the novel, and I found myself absorbing her feelings towards her captor, and it became hard for me to separate fiction from reality.

As an avid reader and reviewer, I often find myself becoming desensitized to thriller/kidnapping novels the more that I read them.  It takes a lot for me to feel personally affected by a story, but Stolen wove itself under my skin.  Upon finishing the novel I felt an overwhelming wave of sadness that consumed me for days afterward.  I wanted to hate Gemma’s kidnapper, but at the same time, I loved him like she did.  Lucy Christopher’s writing was bizarrely realistic in the way that she completely transported me to the Australian outback that Gemma was “trapped” in.  I could feel the heat, sand, and danger of the desert as I read, and it almost felt like I was suffocating.  I have never felt more conflicted about my feelings concerning the characters in a novel, but at the same time, I am thankful for the experience that Lucy Christopher granted me as a reader.  I felt exhausted after reading her novel but in the best way.

No matter your age, Stolen will impact your soul.  If you are pining for a life-changing read, please go and pick up Stolen at your earliest convenience.  (Or, you know, RIGHT NOW.) And then come back and tell me your thoughts.  I’d love to hear them!