The full list of banned or challenged books is quite immense, and many of them share the same themes that contribute to them being challenged.  Since most of the books on the banned list have been banned from schools and/or curriculum, it is safe to say that they were originally challenged to protect young adults.  But I ask you this, do you think that young adults need protecting from certain literature?  Do you agree with banning books from school and/or curriculum?  Let me know in the comments!

They only meant to scare him.

Mr. Griffin is the strictest teacher at Del Norte High, with a penchant for endless projects and humiliating his students. Even straight-A student Susan can’t believe how mean he is to the charismatic Mark Kinney. So when her crush asks Susan to help a group of students teach a lesson of their own, she goes along. After all, it’s a harmless prank, right?

But things don’t go according to plan. When one “accident” leads to another, people begin to die. Susan and her friends must face the awful truth: one of them is a killer.

Leave the lights on when reading this classic thriller! This new edition features modernized text and a new introduction by Lois Duncan, the master of teen horror.

However, one thing that does bother me is that Killing Mr. Griffin has been accused of challenging authority, and that plays a big factor in why it has been banned.  But if you read the book, you will understand how Mr. Griffin is borderline abusive towards his students.  Even though kidnapping and killing is not an option, the students in the novel should have had the right to speak out against the way that Mr. Griffin was treating them.  I personally do not think that “challenging authority” is an excuse for banning a book, and art should be allowed to be expressive.  Fiction is a great way for authors and readers to imagine what life would be like if they fought back.

Even though I do understand the concerns surrounding this novel, I think that it is a great book to get teens in the thriller/horror genre.  If you haven’t read Killing Mr. Griffin yet, I highly recommend it!  It is a short novel that is sure to keep you up all night. 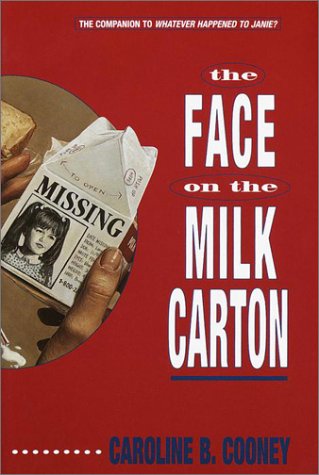 The Face on the Milk Carton

No one ever really paid close attention to the faces of the missing children on the milk cartons. But as Janie Johnson glanced at the face of the ordinary little girl with her hair in tight pigtails, wearing a dress with a narrow white collar–a three-year-old who had been kidnapped twelve years before from a shopping mall in New Jersey–she felt overcome with shock. She recognized that little girl–it was she. How could it possibly be true?<br><br><br>Janie can’t believe that her loving parents kidnapped her, but as she begins to piece things together, nothing makes sense. Something is terribly wrong. Are Mr. and Mrs. Johnson really Janie’s parents? And if not, who is Janie Johnson, and what really happened?

The Face on the Milk Carton by Caroline B. Cooney is one of my favorite novels of all time.  I devoured the entire series when I was in middle school, and it really opened my eyes to the darker side of young adult literature.

However, some people do not agree with letting young adults read The Face on the Milk Carton.  Like Killing Mr. Griffin, this novel challenges authority; however, it also presents sexual language and has been deemed inappropriate for the intended age group.

In the novel, Janie questions whether her parents are her real parents or not after seeing a picture that looks a lot like her on a milk carton.  The way that Janie challenges what she has always known shows initiative and strength.  I feel that Cooney’s series allows young adults to take control of their lives and question what is being told to them.  This is more than invaluable, and I honor Cooney for her initiative.

The Perks of Being a Wallflower

Read the cult-favorite coming of age story that takes a sometimes heartbreaking, often hysterical, and always honest look at high school in all its glory. Also a major motion picture starring Logan Lerman and Emma Watson, <i>The Perks of Being a Wallflower</i> is a funny, touching, and haunting modern classic.The

The critically acclaimed debut novel from Stephen Chbosky, Perks follows observant “wallflower” Charlie as he charts a course through the strange world between adolescence and adulthood. First dates, family drama, and new friends. Sex, drugs, and The Rocky Horror Picture Show. Devastating loss, young love, and life on the fringes. Caught between trying to live his life and trying to run from it, Charlie must learn to navigate those wild and poignant roller-coaster days known as growing up.

The Perks of Being a Wallflower by Stephen Chbosky is my last pick for my top three favorite banned books.  This novel helped me immensely when I was in high school, and it has changed so many lives.  However, with power comes opposition.

The Perks of Being a Wallflower has been mostly challenged due to the homosexuality present in the novel, sexual language, and discussion of alcohol and drugs.  Many people believe that young adults shouldn’t read the novel because it glamorizes these topics, but I disagree.  The Perks of Being a Wallflower is one of those novels that is so similar to the true teenage experience that it hurts.  Chbosky knows how to connect to young adults, and I would hate to see this novel disappear.