The second novel in an epic steampunk horror series, MIDNIGHT SKY is the sequel to CRIMSON SKY, where secrets buried in the past are uncovered, and choices are made that will affect not only the lives of desperate characters, but of their world as a whole… 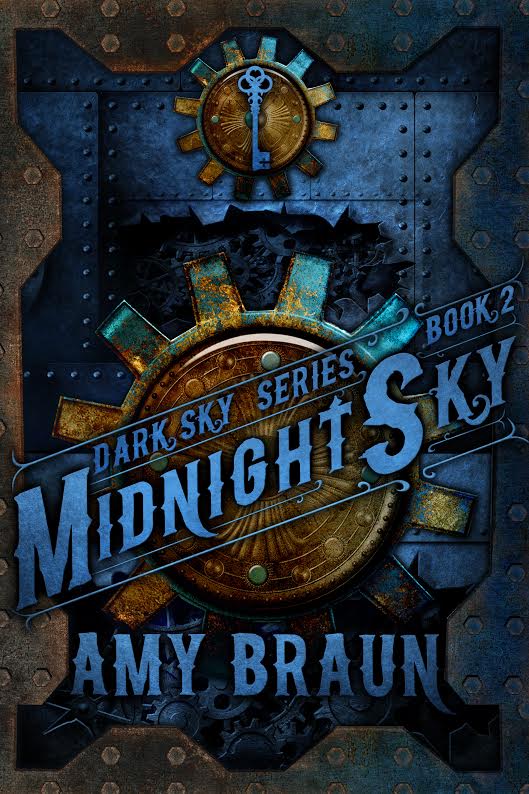 MIDNIGHT SKY continues its journey in Westraven, following the aftermath of the Behemoth’s destruction and the freeing of its citizens after a decade of oppression and terror. Though the skies and streets of Westraven have been cleared of any bloodthirsty Hellions, young engineer Claire Abernathy and the crew of the Dauntless Wanderer have their hands full. They’ve been unable to find the location of the ship Claire’s parents used to locate the Breach– the tear between worlds that brought the Hellions and their horrors into the once glorious trade city– which could prove vital to sealing the Breach and locking the Hellions away for good. When Claire’s younger sister Abby suddenly becomes violently ill, Claire begins her expedition to uncover the true story of how the Breach was opened. She hopes to find a solution that will close the Breach forever, but she begins to uncover truths about those she trusts which could force her to make a sacrifice that will cost her everything she loves. 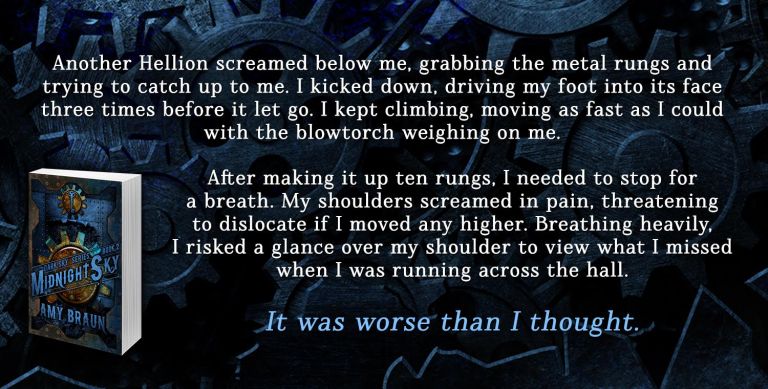 MIDNIGHT SKY was probably the most challenging novel in the series to write. Sequels need to carry the events of the first story and act as the gateway to the grand finale. I wanted this story to have a dramatic end, but I needed events to carry the story and close certain questions. I was excited to delve back into the world of Westraven and add new history to the story. I decided to focus on the backstories of Claire’s parents, since their actions are crucial to the series and the story as a whole.

The map I sketched of Westraven became more detailed, and I think my favorite setting to write in this story was the Barren, a haunting, once militarized portion of Westraven that holds history for more than one member of the Dauntless crew. World-building is one of my favorite things to write about, and I was excited to jump back into Westraven and expand its setting.

Another exciting element was the love triangle between Claire, Sawyer, and Riley. I’d always planned for a rocky relationship between Claire and Sawyer, given their strong wills and butting-heads, but I’ve never written a love triangle. Riley was a late addition to the DARK SKY universe, and I was so glad to include him. His story is a complex, terrifying one, and since he seeks Claire’s affection, it forces Sawyer to consider his attitude when the risk of losing Claire’s heart becomes evident. He doesn’t trust Riley and fears for Claire’s safety, but to win her over he’ll have to change. By the time the story was over, I could tell that all of the characters had grown, though Sawyer’s arc was perhaps the most apparent.

Starting the story took a little longer than I intended, but I was flying through it by the end. The final scenes were written at 2:00AM because I couldn’t sleep without the idea jotted down. I was very happy it ended the way it did, considering what will be coming in the final novel. Since MIDNIGHT SKY grew so close to my heart, I decided to put more effort into its promotion, seeking the help of XPresso Tours and En Pointe Author Services to help with blog tours, release blitzes, and review opportunities. I’m so pleased to have taken that risk, since it has definitely paid off.

There was a fair amount of editing recommended by both my Beta reader and my editor, but I was grateful for their insight. I constantly strive to improve my writing, and correcting my bad writing habits helps produce a stronger story.

One of the best moments in this journey was seeing the cover for MIDNIGHT SKY, created by Deranged Doctor Design. They blew me away with the CRIMSON SKY cover (and every other cover they’ve made for me), and I decided to put a little more insight into what I wanted from the sequel’s cover. The result was stellar. I couldn’t be happier with the look of the cover, and am dying to see what they’ll create for the final novel and two novellas of the DARK SKY series.

Writing sequels is always daunting. You want to carry on with what readers love, but you also want to introduce new elements to make the series stronger as a whole. I’ve never written an ending like this before, so I hope my efforts paid off. I know that I’m happy and proud and passionate about MIDNIGHT SKY, and I think new readers and fans of the previous novel will find it to their liking.

Q & A: Amy Braun and Midnight Sky– MINOR SPOILERS BELOW.

Q: Did you have any specific events in mind when you began Midnight Sky?

A: For the most part, yes. I knew I wanted to clear up basically all of the secrets carried over from Crimson Sky since the final novel will have lots of action. That meant many of the characters and their relationships had to grow. To me, this feels like a short novel. But reading over it, I realize how much occurred and how deeply it might impact readers. I think the only major event I really, truly planned concerns Riley. After introducing him in Crimson Sky, I knew I wanted him to be absolutely integral to the plot. His big event doesn’t come until the end of the novel, and I have to say, I was thrilled to get to that point. I’ve never really written a cliffhanger before, and I have to say that I understand why authors love them so much. As a reader, they can be a beautiful nightmare (read Julie Kagawa’s Eternity Cure if you don’t believe me), but as an author? Talk about exciting!

Q: What challenges did you face writing Midnight Sky?

A: It was all in the details! My knowledge of technical things is basic at best. I definitely don’t have the skills Claire has, and I spent a lot of time researching engineering terms and coming up with ideas to help her use her abilities. I had to really get in the mindset of Claire and explain how certain things worked in terms that, well, I understood. One scene kept me up until around 2:00AM because I consulted a technician friend of mine who worked on an oil field. He gave me an idea about oxygen tanks and flamethrowers, and soon I had a crazy idea that kept me up until I wrote the last page of the epilogue. I loathe writers block, but once I get past it, I refuse to stop writing.

Q: Is there anything you wish you’d kept in Midnight Sky? Any deleted scenes or other secrets?

A: Not really. One of the comments I received from my Beta reader was that I should delve more into the stories of side characters Gemma and Nash. I was already one step ahead, having written two prequel novellas centering around them and their introduction to Sawyer’s crew. I also introduced another new character named Moira at the Beta reader’s suggestion, and was happy to add her. I love building characters and became more attached to her than I realized. For the most part, I concentrated on the story I was building, knowing that there were a couple secrets I could leave until the final novel.

Q: Are you Team Sawyer or Team Riley?

A: This is kind of a double-edged question. From a writer’s perspective, I can say that I’m Team Sawyer. I love writing his mood swings, even though I know they must drive some readers (and certainly Claire) crazy. Since the third and final novel will be told in two perspectives, I wanted him to grow and be prepared for all the madness he sent his way. Plus, it was a lot of fun to write his romance attempts with Claire. All this being said, as a reader, if I didn’t know anything about this story or the pasts of the pirate and the soldier, I might be more inclined to join Team Riley. Who doesn’t love a damaged man who can still be kind and generous despite all the horrors he’s endured and continues to be traumatized by, and who’s not afraid to stand up to the self-proclaimed alpha male of the group to fight for what he desires?

Q: Can you go into more detail about the final novel and the novellas?

A: I can… but what fun would that be? Since I mapped out the rest of my writing and release schedule for the year, here’s what I’m willing to share: The next Dark Sky story will be an ebook prequel novella called Amber Sky, which will be released October 2016 and told from Nash’s perspective, focusing on his time with his old marauder clan before he met Sawyer. Following that story will be a short story called Engineered Deceit. I wrote it on a whim for Mocha Memoirs Press’ upcoming steampunk horror anthology, Gears, Ghosts, and Grimoires, to be released in November. It’s a shorter prequel with Sawyer as the lead voice and telling a story about what happens when someone really loses their mind after The Storm. December will be Smoke Sky, another prequel novella featuring Gemma as she worked her way into Sawyer’s crew and Nash’s heart. Finally, the last novel in the Dark Sky series– Obsidian Sky. It will be released in February 2017 and told from both Claire and Sawyer’s points-of-view. I loved writing the final story, and I hope the novellas and short stories will continue to build the hype.

She has short stories in various horror and urban fantasy anthologies such as Call From The Grave, Hotel Hell, Survivalism in The Dead Walk: Volume 2, Dismantle in The Steam Chronicles, Lost Sky in Avast, Ye Airships!, Secret Suicide in That Hoodoo, Voodoo, That You Do, Bring Back The Hound in Stomping Grounds, Charlatan Charade in Lost in the Witching Hour, and her award winning short Dark Intentions And Blood in AMOK!

PATH OF THE HORSEMAN